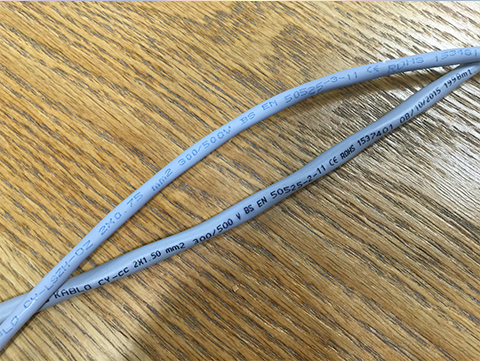 Under the provisions of the UK Wiring Regulations (BS 7671) certain types of cables, meeting British Standards (BS) or UK adoptions of European Standards (BS EN) are designated for use in fixed installations. Their proper selection and use can be part of ensuring compliance for the full system.  Where an installer chooses to use a cable not selected from one of the designated standards, he must satisfy himself, and any independent inspecting authority, that an equivalent level of safety is ensured.

ACI, however, continues to find evidence of cables being used and being offered for use in UK fixed wiring applications that claim to meet these or other standards and, more significantly, when tested do not comply with the provisions of thosestandards.

Recent examples include so-called NYY cables claiming, via external marking, to meet IEC 60502-1, and a so-called CY cable claiming, via its external marking, to comply with BS EN 50525-2-11. When independently tested, the former showed that the thickness of the outer sheath was significantly below that required by the standard, and with the latter the construction and marking did not conform to the requirements of the standard.

BS EN 50525-2-11 specifies harmonized flexible cords such as H05VV-F (318_Y in CMA coding). Low smoke, halogen-free equivalents are in BS EN 50525-3-11. Cables designated SY, YY or CY are designed for instrumentation and control purposes.  They often have lower insulation and sheath thicknesses by comparison with the BS EN flexible cords, and/or taped beddings.  As such they would not conform to the harmonized standards, and should not claim to do so via a BS EN marking as this is a fraudulent claim.

The best way to ensure compliance with the Wiring Regulations in respect of the cables to be used is to:

Purchasers and users of cable should be vigilant over this issue and contact the ACI if they have any concerns about their cable choices. Further information about the ACI can be found at www.aci.org.uk. You can also call 0208 946 6978/07973 636688 or email info@aci.org.uk.