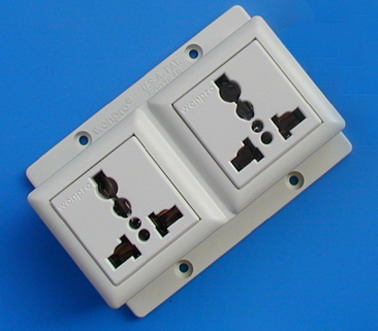 In September 2014, we reported on a dispute between the BBC and safety organisation 'Fatally Flawed' over Chinese made universal sockets. This concerned a BBC radio programme that Fatally Flawed believed ‘promoted’ dangerous and illegal products in the UK. Now, the BBC has finally removed the offending programme from its website. James Hunt reports:

An article entitled ‘A universal plug socket... at last?’ by the BBC’s renowned journalist Peter Day and posted to the BBC’s online magazine on 1st June 2012, was at the centre of arguments over the safety of the products concerned.

David Peacock, FIET, the founder of PlugSafe (www.PlugSafe.org.uk) and co-founder of FatallyFlawed (http://www.fatallyflawed.org.uk), said that this radio article provided ‘poorly researched praise for illegal products’ that are illegal to sell into the UK. He had taken up the issue with the BBC but became concerned at the organisation’s failure to provide a satisfactory response to his complaint over two years.

At about the same time that we published our article, based upon the correspondence between the two parties (which can be seen using the link at the bottom of this web page), Ian Murray MP, who is David Peacock’s constituency MP, also took up the case with the BBC. As a result of both efforts, the BBC did finally re-engage and eventually removed the article at http://www.bbc.co.uk/news/magazine-18266022

The nub of the dispute concerned the conflict between the programme and a report prepared by NEMKO for the Electrical Safety Council.

This says that (1) ‘From a legal point of view it is clear from the above extracts that it is illegal to install any socket (with which standard BS 1363 plugs may be engaged) that do not comply with the requirements of BS 1363’ - and (2) ‘Conclusions and observations: From the test results above it is clear that as well as the legal implications of installing these universal socket-outlets in the UK for domestic and commercial use, there are also serious potential hazards including risk of electrocution and risk of fire’.

This is not about any particular universal socket, but all universal sockets that accept BS 1363 plugs in addition to plugs meeting other standards; they are generally unsafe, and particularly unsafe in the UK because of our standard wiring methods (the ring final circuit).

In addition to being unsafe, they are illegal in the UK. It is a simple fact that no socket that accepts both BS 1363 plugs and any plug made to some other standard can conform to BS 1363.

The BBC has at last – after nearly three years - agreed, removing the offending article are saying: ‘This report, about the development of universal plug sockets in China, has been removed following a complaint that was upheld by the BBC's Editorial Complaints Unit in March 2015. It had raised safety concerns about the use of such products in relation to UK standards’.

The BBC has officially officially published its findings at: http://www.bbc.co.uk/complaints/comp-reports/ecu/auniversalplugsocket

However, David Peacock comments: “The PlugSafe and FatallyFlawed campaigns are pleased that the BBC issue has been resolved, but PlugSafe remains concerned that universal sockets are still readily available from online retailers and that the limited resources of Trading Standards departments seem unable to control this.”

These online retailers include Amazon, eBay, WeSellElectrical.co.uk and CIE-Group Ltd., among many others, according to David Peacock, who provided web links to the items concerned.

To see the full original article charting the course of the dispute and providing details of the universal plug sockets concerned and the regulations, please use the link at the bottom of this web page. Note that there are many interesting Voltimum users' comments posted at the end of this original article. Please take the time to read them.