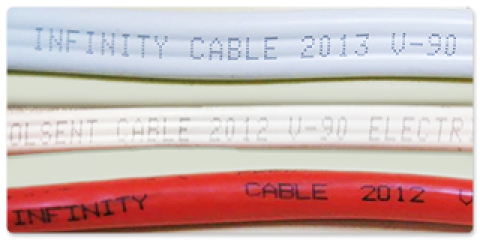 The Approved Cables Initiative (ACI) is reporting that Woolworths may face a clean-up bill of between £16 to £32 million for its role in the sale of faulty electrical cable to around 40,000 households and businesses. This major problem has occurred in Australia, but the risk is that it can happen in the UK:

In September, the ACI advised that a voluntary recall was taking place of Infinity and Olsent-branded electrical cable. Tests last August had revealed the cable’s plastic coating could become brittle prematurely, especially if exposed to prolonged high temperatures, exposing the internal conductors and raising the risk of short circuits, electric shock and fires.
A regulatory task force established by the Australian Competition and Consumer Commission* (ACCC), the UK’s Office of Fair Trading equivalent in Australia, initially estimated the cost of identifying and removing the faulty cable, rewiring and repairing walls and ceilings would be about £43 million (an average of over £1000 per household). The taskforce has now revised its estimates and believes the average cost of fully rewiring affected households could be £2100, taking the total clean-up bill to as much as £86 million.
Infinity Cable Co, the company that imported the cable from China, went into liquidation last year and wholesalers and retailers have agreed to meet the costs of inspections, removal and replacement where the cable is found.
Woolworths sold more than 40% of the cable and will have to pay the lion's share of the bill. In a note on contingent liabilities in its 2014 accounts, Woolworths said a reliable estimate of the cost associated with remediation or other actions required was not possible at this time.
The recall covers Infinity and Olsent-branded cable that was sold across Australia from 2010 to last year. The ACCC said no accidents had been reported, but the cables would degrade over time and the risk of physical contact was highest in roof spaces and under raised floors.
A stark warning!
A spokesperson for the Approved Cables Initiative said: “This story sends a stark warning to UK distributors, wholesalers, retailers and contractors. The entire supply chain is being held accountable in Australia and we are aware that the level of imported product has dropped dramatically as the ACCC clamps down on poor quality, unsafe product.
“Now more than ever, weighing up the risks of choosing an unapproved and potentially substandard cable over one which meets recognised standards and carries third party approval is vitally important. It is not just public safety that could be at risk but reputations and livelihoods too. This recall is likely to make headlines for many months to come.”
If you would like to know more about the Approved Cables Initiative’s campaign, please visit www.aci.org.uk or contact the ACI on 0208 946 6978

07973 636688 or email info@aci.org.uk
Approved Cables Initiative
Approved Cables Initiative (ACI), an industry-wide working group, is highlighting the dangers of sub-standard, defective and counterfeit cable to the cable supply industry (electric and data) and the general public.
Its work focuses upon communicating the ACI’s concerns with such cable and that there is a gap in current legislation and enforcement. It is currently pushing for greater checks on imported cable and to increase the penalties for infringements.
Anyone with information or concerns about a suspected faulty, defective or counterfeit cable should contact the ACI who will test samples and if found to be unsafe supply details to relevant industry regulators and legislators.  ACI can also provide guidance where appropriate to installers.
ACI works with supply chain representative bodies including Electric Distributors Association (EDA); Electric Contractors Association (ECA); Electric Safety First; British Approvals Service for Cables (BASEC); British Cables Association (BCA); Energy Networks Association (ENA); Ascertiva (previously the NICEIC Group Limited), SELECT and the Joint Industry Board (JIB).
An ACI spokesperson has commented: “Faulty cable is a worldwide issue and UK distributors and wholesalers need to be heedful when making their cable choices.
“Once again we are looking at cables of Chinese origin that have failed to meet national safety requirements. The importance of purchasing and importing cable products that carry the appropriate national, European and International standards should not be overlooked and the reassurance third party approved cables provides should be recognised.”
More information about the Infinity and Olsent recall can be found at: www.accc.gov.au/update/infinity-cables-frequently-asked-questions.
*The Australian Competition and Consumer Commission (ACCC) is an independent Commonwealth statutory authority whose role is to enforce the Competition and Consumer Act 2010 and a range of additional legislation, promoting competition, fair trading and regulating national infrastructure for the benefit of all Australians.